First, I would like to thank the participants of the Iron and Steel Summit 2022, Bahrain. This event was held at the same time as COP 27 in Sharm–El Sheikh, Egypt, and several communications on the Green Steel theme were held and discussed. It is a clear aspiration of the iron and steel family to move towards a clean steel industry by 2030.

I think it is time for Arab steel companies to start thinking about our contribution to achieving this goal. The objectives announced at COP 27 are promising, and all sectors of activity must contribute to them. There is a strong political commitment, and the leading Arab countries such as Saudi Arabia, the United Arab Emirates, and Egypt have made firm commitments to 2030.

The steel industry is responsible for about 7% of global CO2 emissions; therefore, the decarbonisation of this sector plays an essential role in achieving climate goals.The sector is highly exposed to international trade and global overcapacity. The Arab steel industry needs short-term operational changes and strategic decisions towards an economically viable and climate-neutral transformation in the long term. This latter requires the alignment of the entire chain of steelmakers, upstream and downstream of this vital industry to the economy, starting with companies, investors and political decision-makers to find efficient solutions to decarbonize the steel industry, without forgetting the financing part, which plays a crucial role in the policy implementation.

It is here where community policies come into play, such as the European Union, which has already adopted 60 low carbon emission projects implementation by 2030, estimated at 85 billion euros, which will permit to reduce 55 per cent of emissions by 2030. Measures, which are more drastic, will have to be taken by the United States, Canada and the European Community with the Border Carbon Adjustment BCA, which would be assessed at a minimum of 40 per cent per tonne. For instance, for the EEC, this consists of applying a price to imported products according to their carbon content and the difference in carbon price between the European Union and the country of origin. This scheme will therefore put EU producers and third-party producers on an equal footing so that the same price is paid for a given quantity of carbon emitted in Europe or elsewhere.

It remains to be seen whether the Arab countries will be able to mobilize around such a policy and medium and long-term objectives.

In this context, a project to create a technical committee is being created within the Arab Iron and Steel Union in parallel with the economic committee formed five years ago. This multidisciplinary committee will also focus on environmental aspects by presenting information and recommendations for effective solutions for the clean steel industry to achieve the 2030 climate and energy objectives and implement the 2050 long-term strategy. An industrial audit of several pilot sites will be necessary initially to highlight our capacity or not to make this transition by identifying the means and the  planning and this, with the assistance of partners and organizations specialized in the matter. 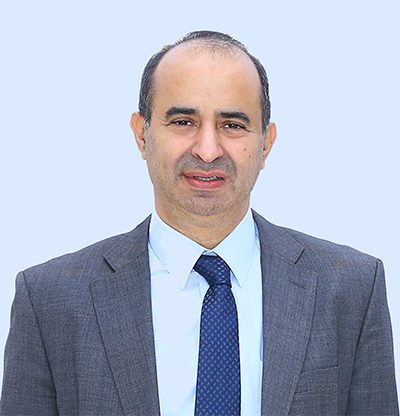 Indicators of crude steel production in the world and Arab countries

The production share of Arab countries is increasing - except for the period of the Corona pandemic, until it reaches 1.65% of global production in 2021.

The entry of some new direct-reduction steel plants in some Arab countries, and the closure of most plants with blast furnaces. 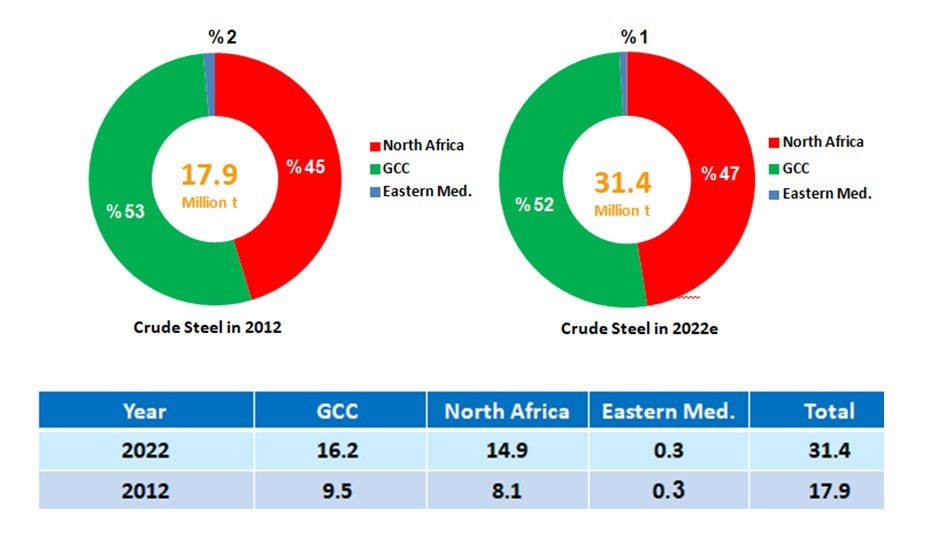 Steel production in the Arab countries increased at a compound annual rate of 5% between 2012 and 2022, with the ratios fixed between regions and distributed as follows: 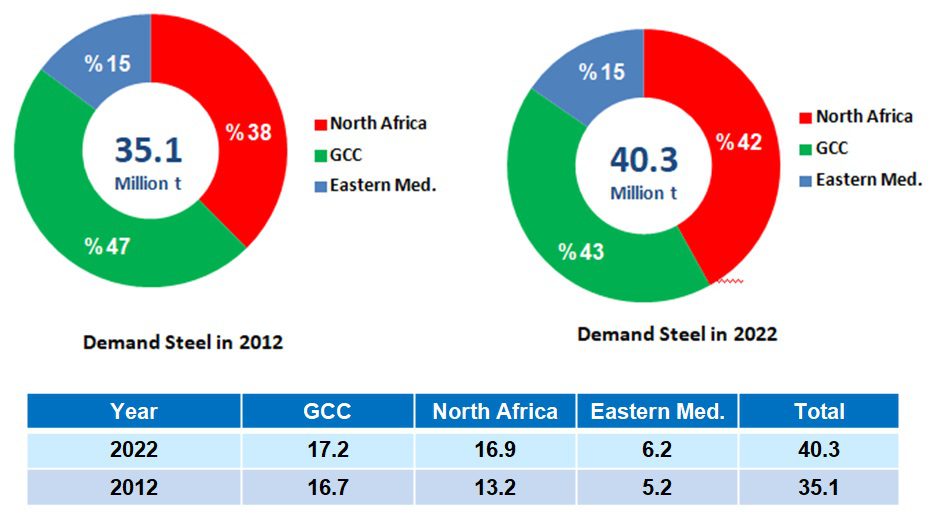 An increase in steel consumption in Arab countries at a compound annual rate of 2.4% between 2012 and 2022

An increase in the percentage of consumption in North African countries from 38% in 2012 to 42% in 2022, and a slight decline in the share of the Gulf countries and the Eastern Mediterranean countries. 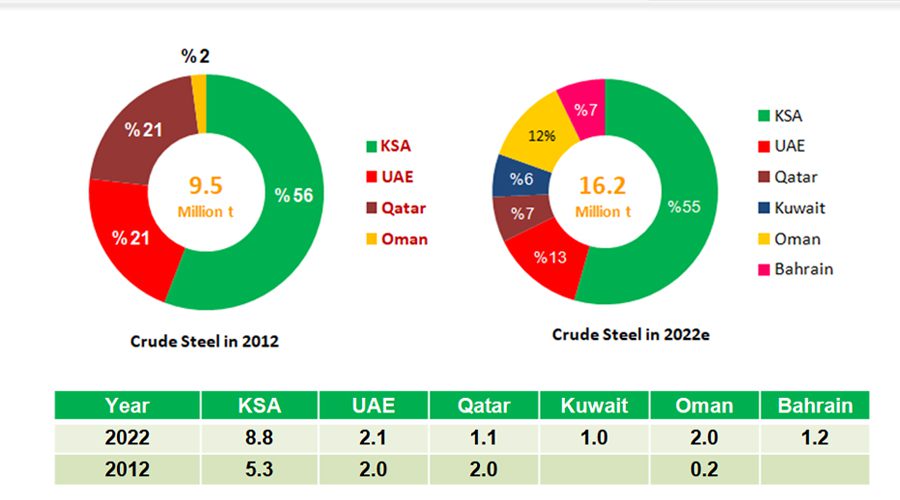 Saudi Arabia has the largest share of 55% in 2022 with a production of 8.8 million tons, followed by the countries of the Emirates and the Oman. 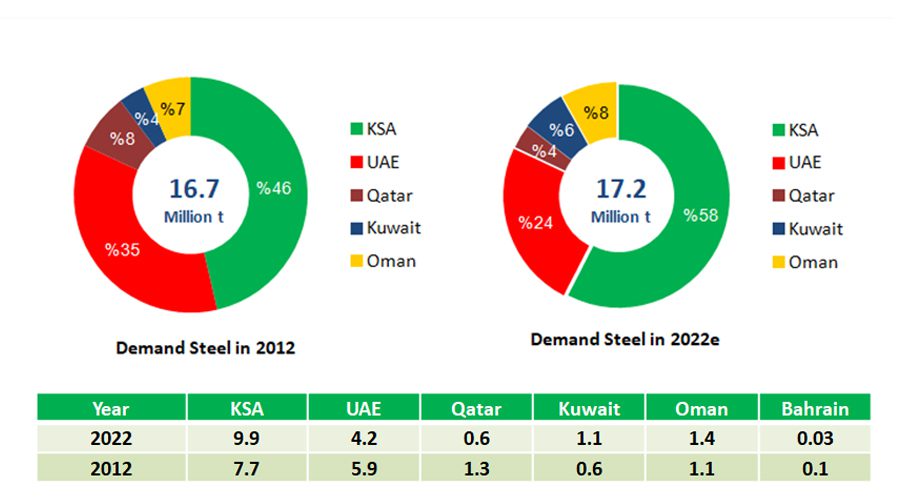 The volume of steel consumption in the Gulf region is estimated at 17.2 million tons.

Saudi Arabia is one of the largest steel consumers in the Gulf region, with a share of 58%, followed by the UAE with 4.2 million tons, or 24%. 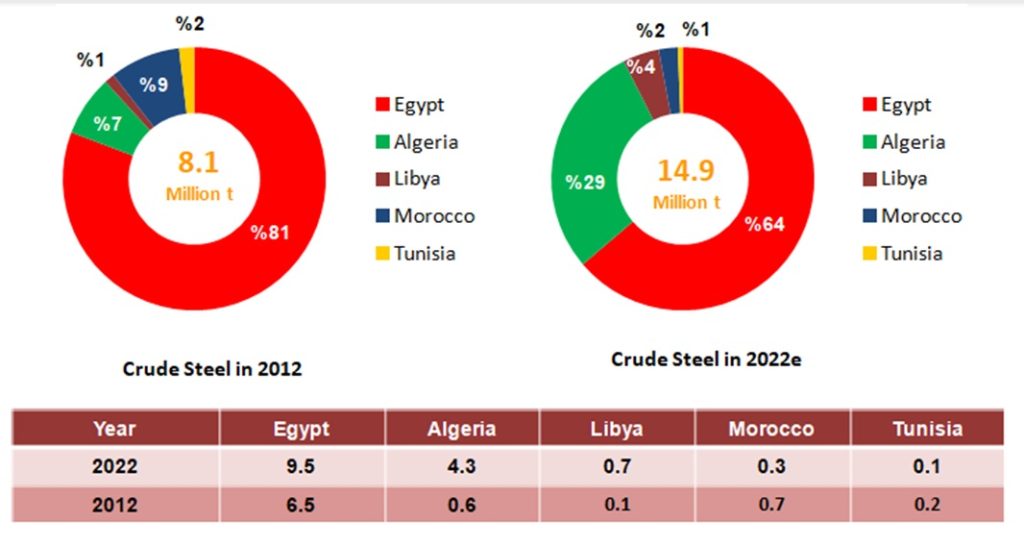 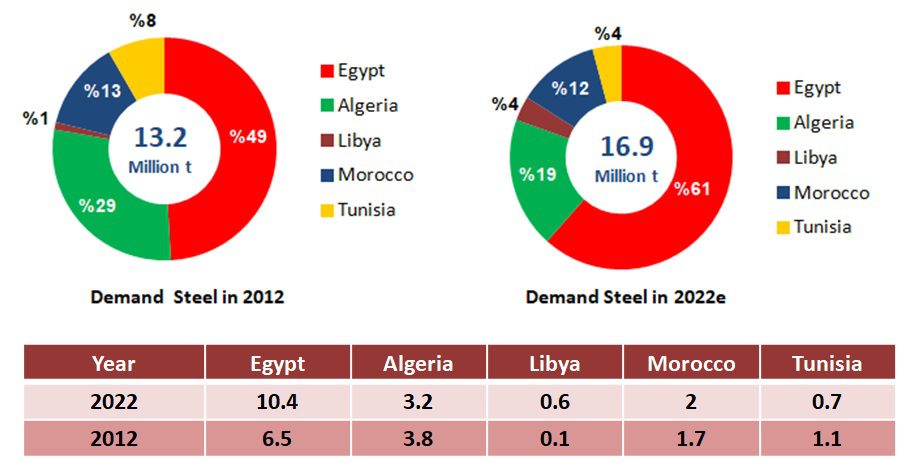 The production of the Eastern Mediterranean region countries is about 300 000 tonnes from one country, which is "Jordan".

The iron and steel industry in the Republic of Syria stopped due to the current circumstances.

The amount of consumption is 6 million tons in 2022.

Iraq is the largest consumer in this region with 3.6 million tons and a share of 58% of the total.

The Arab countries’ need for steel is estimated at 8.8 million tonnes in 2022, distributed as follows:

1 million tonnes in the Gulf region.

5.9 million tonnes in the Eastern Mediterranean.

The Arab countries region is still a steel-importing region

-   The Eastern Mediterranean region is the largest importer with a volume of 5.1 million tons.

-  The North African region's exports more than doubled as a result of the increase in exports to Egypt and Algeria.

There is a surplus in steel production in Bahrain, Algeria, Oman and Qatar.

and the need in the rest of the countries, the largest of which is Iraq.

An increase or decrease in oil prices inevitably affects the volume of investments directed to infrastructure, and thus the volume of demand for steel.

The impact of the Russian-Ukrainian war on the Arab countries may differ from one country to another. We find that the Arab oil-exporting countries are benefiting, even temporarily, from the rise in oil prices, and this reduces inflationary pressures.

As for the non-oil Arab countries, they are under constant inflationary pressure and resort to indebtedness to meet their needs, whether it is raw materials or petroleum materials.

Urging Arab governments to protect their economy, like most of the new governments in Europe or America, which are adopted by peoples to get out of common policies such as the European Union and work to develop sovereign policies specific to each country, and this is when it comes to protecting its economy and preserving jobs.

In the end, it is difficult to make predictions for the coming years due to the lack of clarity in the vision in light of the political fluctuations and the balance of power between the major countries and their effects on most countries of the world. 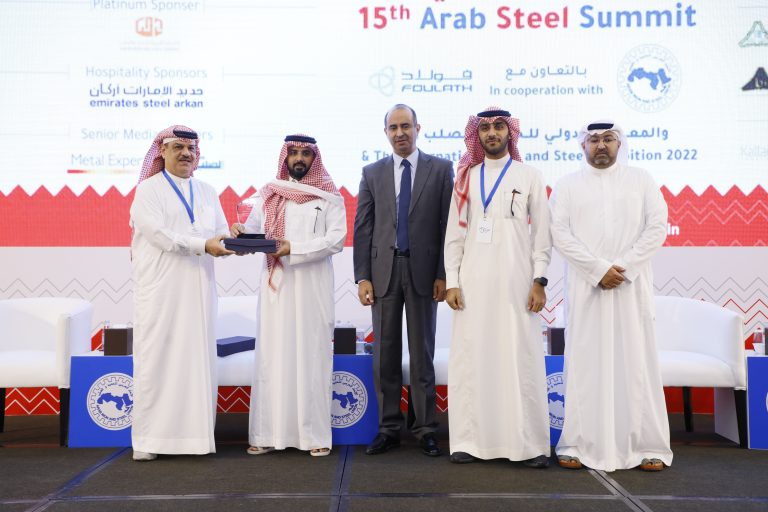 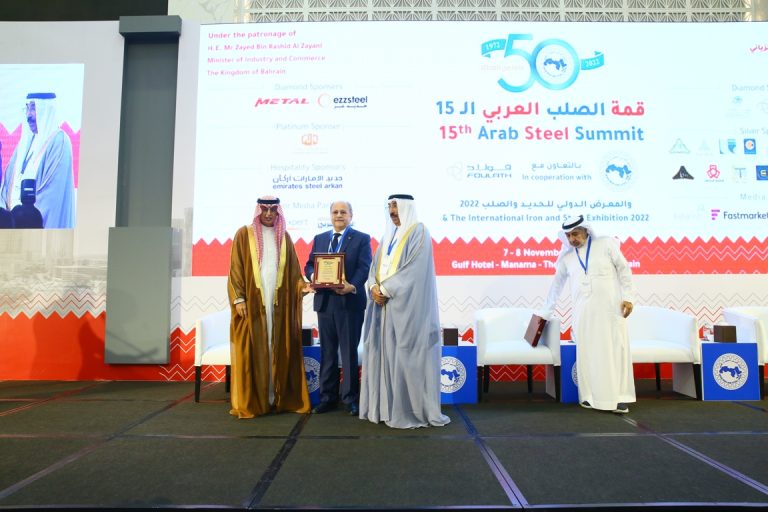 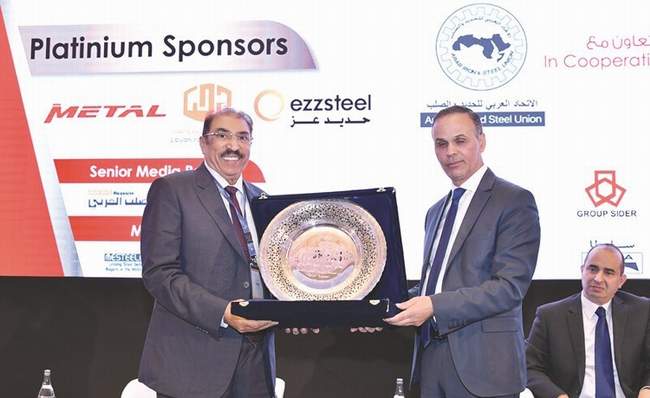 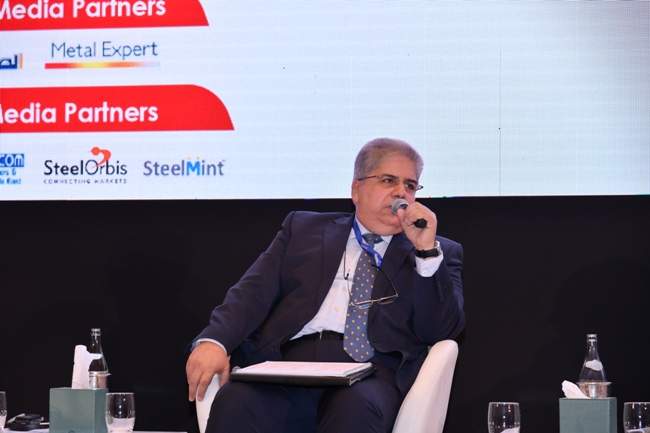